The cream-puff dough almost did me in. Beating in the eggs one at a time with my six-month-old titanium shoulder was brutal. Tony had to step in to spell me. Who knew cooking would become a matter of stamina as I age?

The pate a choux dough was for French gougere, light-as-air unfilled puffs that were a cocktail snack at a family gathering last weekend. I made the hors d’oeuvre followed by a special meal to mark two important birthdays — Tony’s 60th and my brother’s 70th.

I went all out. The guys wanted steak, so I rubbed inch-thick strips with a homemade seasoning mix (coarse sea salt, fresh-ground pepper, a bit of sugar and herbes de Provence) and grilled them over charcoal. My brother-in-law watched the meat while I made béarnaise sauce with fresh tarragon and plated fat roast asparagus and small new potatoes roasted with olive oil and coarse salt.

I also served my brother’s childhood favorite, Perfection Salad — orange Jell-O with crushed pineapple and shredded cabbage and carrots, with pineapple mayo dressing on the side.

Dessert was two sugar-free layer cakes — one chocolate with chocolate icing and sliced almonds clinging to the sides, and the other — Tony’s request — lime with chocolate filling, whipped cream frosting and coconut.

That was Saturday. On Sunday I slept.

Back in the day, this would have been a quick-fix meal I would have been slightly embarrassed to serve to friends. Back then I could complicate even a salad course with, say, Roquefort beignets. And of course the baguettes with the cheese course would have been homemade. Now my idea of going the extra mile is serving a carousel of sour cream, crumbled bacon, butter and sea salt with the roasted new potatoes.

Dang, I miss those fabulous meals.

The gougere provided a taste of my decadent past without a lot of work if you don’t count that incessant beating. They can be made ahead and frozen, and reheated briefly at the last minute. The prep involves combining flour with melted butter and water and heating while stirring until the dough comes together in a big, springy ball. Then off the heat, four eggs are beaten in one at a time until each egg is absorbed by the flour mixture.

With this dough you can make cream puffs and eclairs, or beat in shredded cheese for gougere. The airy, crisp puffs are often served in wine cellars in France to customers who look like they’ll buy a case or two. 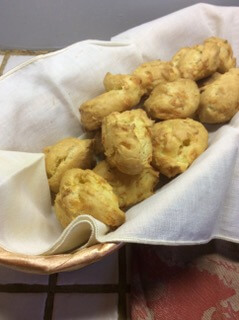 Bring water, butter, salt, pepper and nutmeg to a boil in a heavy, 1 1/2-quart saucepan. Remove from heat and pour in the flour all at once. Beat vigorously with a wooden spoon to blend. Then beat over medium-high heat for 1 to 2 minutes or until the mixture leaves the sides of the pan, forms a mass, and begins to film the bottom of the pan.

Remove pan from the heat and make a well in the center of the paste with your spoon. Immediately break an egg into the well and beat it into the paste until it has been absorbed. Continue with remaining eggs, beating them in one at a time. Beat in the grated cheese.

Drop the dough by rounded tablespoons onto parchment-lined baking sheets, leaving 2 inches between mounds. Brush the tops of the mounds with an egg wash (1 egg beaten with 1 teaspoon water) if desired, being careful that drips do not hit the parchment.

Place the baking sheets in the lower third and upper third of an oven preheated to 425 degrees. Bake for 20 minutes. The puffs are done when they have doubled in size and are golden brown.

Remove from the oven and puncture the side of each puff with the tip of a sharp knife. Return to the oven, heat off and door ajar for 10 minutes to dry out the insides. Serve warm or at room temperature.

To freeze, cool completely and place in a zipper-lock bag, cushioned in paper towels. Reheat on parchment-lined baking sheets at 425 degrees for 3 to 4 minutes.

What I ate in (or from) restaurants:
The low-cal plate — a deliciously seasoned hamburger patty, cottage cheese, tomato slices, hard-cooked egg and applesauce — at Village Gardens in Cuyahoga Falls; spicy chili pork wontons and spicy eggplant at House of Hunan in Fairlawn.

From Stephanie C.:
What is “poke” and how is it pronounced? I see it on menus everywhere.

Dear Stephanie:
Poke is pronounced poe-kay, according to my husband, who made it when he worked in a Hawaii sushi bar years ago. Poke is a Hawaiian raw fish salad that is usually served in a bowl. Bite-sized pieces of seafood — classically, ahi tuna — are seasoned and tossed with green onions and eaten as is, over rice, or on leaves of lettuce. One recipe from the Hawaiian Fish Co. blog (honolulufishmarket.com) calls for chili pepper flakes, sesame oil, green onions, salt and sesame seeds.

A fast-casual restaurant devoted to the dish has opened in the Whole Foods plaza in the Wallhaven area of Akron. Poke Fresh is set up like Chipotle, with customers queueing up to choose a base (rice, greens, grains), a protein (tuna, salmon, chicken, tofu) and toppings. The website is eatpokefresh.com.

I had a delicious version of poke at Sushi Katsu in the Merriman Valley. That’s the place Tony owned until he retired. The new chef, Tin, makes great poke and sushi.

From Heidi:
For the man who wanted the recipe for African peanut soup, here is the one I use. I’ve made it several times and think it’s good. I’ve never had the version West Side Bakery makes so I can’t compare.

Heat oil in a 4-quart saucepan. Sauté onion, bell pepper, carrot and celery until soft, about 5 minutes. Add garlic, ginger and curry powder and sauté until fragrant, about 1 minute. Add tomatoes and bay leaf and cook, uncovered, until tomatoes are slightly reduced, about 3 minutes.

Add broth and sweet potatoes; bring to a boil. Reduce heat and simmer about 8 minutes. Add edamame and peanut butter; stir to combine. Add cilantro and spinach and cook until throughly heated and spinach wilts, about 2 minutes. Season with salt and pepper to taste. Makes 8 servings.

Recipe by Cheryl Forberg in “Relish the Healthy Table.”

Dear Heidi:
I know Cheryl Forberg, the recipe’s creator and former nutritionist for “The Biggest Loser” TV show. You can’t go wrong with one of her recipes. She specializes in healthful food that tastes great. My favorite baked taco recipe is from Cheryl. 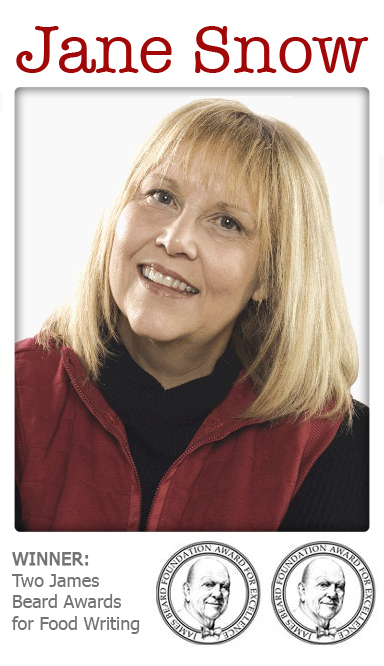