Dear friends,
There are breakfast people and those who gag at the thought of eating before noon. I am among the former. I wake up every morning ravenous for breakfast.

What I would like to eat and what I do eat are polar opposites. I long for pancakes topped with over-easy eggs and real maple syrup. I dream of fried mush dabbed with butter and drizzled with maple syrup. I yearn for brown sugar-sweetened oatmeal showered with fruit and nuts.

What I do eat: Yogurt. Cottage cheese and blueberries. Scrambled eggs and a few grapes, hold the toast. Low-carb eating can be the pits.

Low-carb breakfasts can also be boring, which is why I was intrigued by an inane new product, Crack an Egg. It consists of a little cardboard bowl of various chopped vegetables (onions, green peppers) and shredded cheese. You crack an egg into the stuff, stir and microwave for about a minute, stirring midway through.

Why inane? Because you can do this so much better yourself — fresher, cheaper and without the excessive packaging.

I bought a couple of the packages, tasted and then started making my own. I made delicious versions such as scrambled egg with kalamata olives, cherry tomatoes and feta cheese hit with some oregano, and egg with lox, capers and a squeeze of lemon. My favorite was probably the creamy mugful of leftover Easter ham, ricotta cheese and an egg seasoned with a grind of nutmeg. In the summer when my herb garden gets going, I’ll add mix up even more varieties. Yum.

If you are pressed for time or just stupid-sleepy in the morning (as I am), you can chop a bunch of ingredients and freeze them in little portions just right for microwaving with one egg. The only caveat is that you must be careful not to overcook the egg. Too much microwaving yields Styrofoam-like eggs. At high power in my 1100-watt oven, an egg with two or three tablespoons of add-ins is set and creamy at 50 seconds; at a minute, it tastes like packing peanuts. A recipe with 1/2 cup add-ins, such as my ricotta-ham egg cup, cooks up creamy and tender in 70 seconds, stirring after the first 20 seconds.

These simple scrambles are low-carb, lightening-fast solutions to breakfast boredom.

Combine all ingredients in a pottery mug and beat with a fork. Microwave on high power for 20 seconds. Stir. Microwave 20 seconds longer or until eggs are mostly set. Stir. Let stand 1 to 2 minutes before eating. Serves 1. 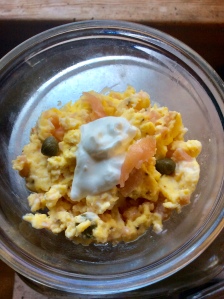 Combine all ingredients in a pottery mug. Beat very well with a fork. Microwave on high power for 30 seconds. Stir. Microwave for 40 seconds longer or until eggs are almost set. Stir and let stand for 2 minutes. Serves 1.

TIDBITS
This month in his often-hilarious monthly column in Mimi Magazine, my friend Mitch Allen details his annual diet in order to fit into his summer shorts. The diet consists mostly of vegetables and fish. Midway through, Mitch asks a question we all have been pondering: “…why was there no tilapia when I was a kid? It can’t be a new species. It’s not like God said, ‘Oh, wait, I forgot the tilapia…’ and went back and created it.”

Exactly right, Mitch. The answer is that tilapia has been here all along but on another continent — Africa. It reproduces like crazy, which is why someone (I couldn’t find out who) got the idea to farm it and sell it to Americans.

Tilapia is actually an umbrella name for a bunch of fish called “cichlid.” A lot of them look like goldfish or koi. I do not eat tilapia because most of our supply comes from China, where U.S. safety standards do not apply. The tilapia farmed there are raised in freshwater lakes in such concentrations that they live in their own waste. They are kept “healthy” with chemicals. They are an invasive species, so when they escape to unfarmed waterways, they decimate the native fish population.

Add to this the fact that tilapia are low in omega 3 fatty acids — the reason we’re told to eat more fish — and you have plenty of reason to ditch tilapia in favor of wild salmon and trout.

Bottom line: If you can find tilapia farm-raised in the U.S., go for it. The next-best choice is tilapia from South American fish farms. Otherwise, skip it.

At least tilapia is in no danger of being overfished like our past piscine obsessions. Remember the orange roughy craze? Swordfish mania? White sea bass (actually, Patagonian triggerfish) on every restaurant menu? Unlike those fish, tilapia is in plentiful supply. I just don’t know if you’d want to eat it.

What I ate in/from restaurants:
Mu shu pork with Chinese pancakes and a shrimp and green bean stir fry from Chin’s Place in Akron (both dishes were excellent); rice cakes with shrimp and hot jasmine tea at Han Chinese Kabob in Cleveland; eggs over easy, grits, bacon and a biscuit at Cracker Barrel.

THE MAILBAG
From Geoff:
I’m pleased to see you finally got to try Bombay Grill’s tomato soup. It’s one of the best soups I’ve eaten and certainly the best tomato soup. Perhaps you and your readers could make an attempt at duplicating the recipe. I’ve had little luck getting the ingredients from the owners. I’d love to make a big batch, portion freeze it and have it whenever I’d like.

Your readers should know about a favorite Asian restaurant of mine in North Canton called Mint and Lime. I’ve been going there for a couple of years and it’s better than most local Asian places and comes close to being as good as those in Cleveland. Everything I’ve had there has been exceptional. Here’s the website: http://www.mintandlimeasianbistro.com.

Geoff:
The flavors of that soup are too complex for me to figure out. Does anyone else want to take a crack at it? I found many versions of Indian tomato soup on the Internet, but none that sounds like the soup I had at Bombay Grill.

I see that the owners of Mint and Lime are related to the owners of my favorite Asian place, Basil Asian Bistro in Canton, so I’m not surprised it’s good. Thanks for the recommendation.