Dear friends,
My days of relishing blushing-pink pork are over. Yours may be, too, if you read the expose on the pork industry Sunday in the New York Times.

In a meticulously researched story, reporter Matt Richtel lays out evidence that pork tainted with a dangerous variant strain of salmonella is seriously sickening people because the bacteria is resistant to four major antibiotics.

Why is this particular type of salmonella so hard to kill with antibiotics? Probably because many pork producers have overused antibiotics on their hogs to the point that the bacteria has mutated into a resistant strain.

Where are these hogs being raised? How widespread is the problem? There’s the rub.

The pork farmers and their organization, the National Pork Producers Council, have refused to cooperate with scientists trying to track the infected meat. Because of the historically cozy relationship of pork producers — and heck, most food producers — with the U.S. Department of Agriculture, rules do not exist to force the farmers to cooperate. The farmers are afraid if the tainted pork is traced to specific producers, their business will suffer. Huh.

According to the Times article, the problem came to light after nearly 200 people became ill from tainted pork in a Washington outbreak in 2015. Unfortunately, the problem is not confined to Washington. An analysis by researchers at the Environmental Working Group found that 71 percent of pork chops in supermarkets in the United States carried resistant bacteria.

Cooking pork to 145 degrees (160 degrees for ground pork) will kill any salmonella it harbors, according to the Centers for Disease Control. But it’s easy to spread the bacteria from raw meat before it is cooked. I intend to handle raw pork very carefully from now on. And I’ll use an instant-read thermometer to be sure it is done.

GUT CHECK
What I cooked last week:
Steamed whole lobsters, microwaved corn on the cob; frozen chimichurri chicken breast (heated) and a bagged chopped salad with chipotle and Cheddar cheese; a BLT (for Tony) and a grilled salmon, lettuce and tomato (me), and Seiberling steamed corn; oven-baked wild sockeye salmon glazed with sweet soy sauce (for me) and with a cucumber-mayo sauce (for Tony), steamed corn, cucumber salad with sesame dressing.

What I ate in/from restaurants, etc.:
Bacon, egg and sausage flatbread, coffee at Red Cup in Boothbay Harbor, Me.; oysters on the half shell with mignonette sauce at Glidden Point Oyster Farm in Edgecomb, Me.; fried clams from Frye House in Farmingdale, Me.; half of a Subway roast beef sub; scrambled egg with ham, a buttermilk biscuit and coffee at Monroe’s Family Restaurant in Twin Mountain, N.H.; a hot dog and a bag of popcorn at a football team fund-raiser along I-90 in Massachusetts; half a Subway ham and cheese. 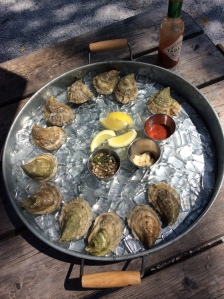 THE MAILBAG
From Dorothy B.:
What a great story, Jane (about last week’s clam-hunting trip). It reminds me of a time many, many years ago when we were camping and went down to the dock and bought our lobsters right off the boat. We steamed them over the campfire using the rack in a large canning pot. Thanks for dredging up some great memories.

From Carol B.:
Wow, Jane, your description of Maine food is so enticing that I want to jump in the car and head east!

I’ve been to Young’s Lobster Pound in Belfast, Maine a couple of times, and thinking about it makes my mouth water. Is there ANY place in Northeast Ohio where we can get food like that?

By the way, September and October are great months to travel to tourist-heavy areas like that. You might have cooler weather, but I hate hot weather anyway.

Dear Carol:
Yes, I will have to start traveling in the off season. The over-tourism caught me by surprise in Paris last year, too.

You won’t find off-the-boat Maine food in Ohio, but you can find lobsters and clams (although rarely steamers) in the fall when clam bake season cranks up. Papa Joe’s in the Merriman Valley in Akron always has a number of lobster specials in the fall, including a lobster bake, and many restaurants offer clam bakes.

But none of them equals sitting on a bench outside eating lobster rolls and fresh-dug clams. Maybe you could get together with friends, make a mad dash to the coast for seafood, and have your own lobster festival when you return.

From Mary P.:
Jane, I made your corn and onion salad the other day. It was delicious.

In reading the email from Bill B., I just did not understand the “microwaving onion stem” and then the rest of the sentence without punctuation, I’m guessing.
So, is he suggesting microwaving the onions…in no butter, little butter, or what?

Sorry to need a clearer understanding.

Dear Mary:
Bill’s email made perfect sense, but I garbled it badly when I retyped it. I didn’t proofread it either, apparently. My apologies.

The point Bill made is that he partially cooks/steams large amounts of chopped onion in the microwave before transferring them to a skillet to caramelize in butter on the stove. Because the onions are partially cooked, they caramelize on the stove much faster and therefore need less butter to keep them from burning.

The chopped onions should probably go in a shallow, wide casserole dish. No butter. Cover and microwave until fairly softened. The time will depend on the amount of onions and the power of your microwave. Exactness doesn’t matter. Even a bit of precooking will shave time from the caramelizing process on the stove. Right, Bill?

From Marnie F., Charlotte, N.C.:
I am a former Cleveland native, living in Charlotte for 30 years. Your corn story a few weeks ago brought back many memories of Ohio sweet corn. I shared your story about eating the corn at various stages after picking at a family reunion with corn lovers from both coasts and the Midwest. Everyone enjoyed your research. My question is whether you have this report available to the public. It would make a great gift for all of the sweet corn lovers I know.

Dear Marnie:
That research ran in a story in the Beacon Journal on August 12, 1987 under the headline Stalking Great Corn. The story was about the then-new hybrid super-sweet corn, and how it tasted compared to regular just-picked corn and ears that were four hours old.

The article is available free in the Akron Beacon Journal database of the Akron-Summit County Public Library. You can access the database online with your library card number at akronlibrary.org. Others can access it through a paid newspaper archives service. Ask at your local library.